After Wilbury Hills Road residents contacted me raising their concerns about the number of lorries which are planned to drive down their road to build the new Hitchin flyover, I raised the issue with the Minister for Transport. I also asked a number of questions in the House of Commons to try to find out whether it wouldn’t make more sense to deliver the building materials by rail instead of by road. Here are the three questions I asked, and the response I received from the Parliamentary Under Secretary of State for Transport:

As you can see this is a very disappointing reply and an abdication of the Minister’s responsibilities. The idea that the Transport Department does not take a view on the increased environmental cost of road movements and does not promote rail in this modern era of road congestion and global warming is truly alarming. It shows just how “unjoined-up” Government thinking is, when the Environment Minister is constantly stressing the importance of reducing CO2 emissions and the Transport Minister is happily supporting more road and air transport.

Today Peter Ashton finished his short internship in my office. Here he blogs about his experience:

On Monday 19th October my work experience began with a tour of the Houses of Parliament. I visited both the House of Commons and the House of Lords. In the Lords, I was told by my tour guide the workings and conventions such as where the Lords Spiritual (bishops) sit, why the seats are red and so on. I also enjoyed learning about the functions of the House of Lords, which is now nearly entirely appointed. For example it used to be the case, up until a week ago, that the House of Lords was in fact the highest Court of Appeal in the UK; but this is no longer true with the establishment of our own Supreme Court. Next followed a visit to the Commons Chamber where I was shown how MPs vote. I later returned to the Commons to watch the House in action with a debate on youth unemployment, in which Mr Heald was scheduled to ask a question. After this, I sat in on a Select Committee (chaired by Sir Menzies Campbell) which was gathering evidence from Damian Green MP about his and Chris Galley’s arrest due to their role in Home Office leaks in 2008.

Today I arrived in time to watch the Home Affairs Select Committee, which was discussing the topic of cocaine trade in the UK. The committee took evidence from a number of people including Mitch Winehouse, father of Amy Winehouse, who is currently in the process of making a documentary on heroin addiction and how it affects not just the addict but also the family. Mitch Winehouse argued that whilst he had been in a fortunate enough financial position with his daughter, treatment for addicts without substantial financial support was not widespread and accessible enough. It was even suggested to the Committee by Steve Rolles, from Transform Drugs Policy, that illegal drugs trade should be legalised which, he argued, would allow for effective government regulation of the industry.

Finally I sat in the public gallery for a debate in the House of Commons in which the Secretary of State for Foreign and Commonwealth Affairs (David Milliband) was questioned, most notably by his opposite number William Hague who was thoroughly entertaining to watch.

Campaigning with the WWF for Our Rivers

On Monday I was pleased to have a meeting with the people heading up the World Wide Fund for Nature’s campaign “Our Rivers”. The “Our Rivers” campaign is a coalition of the WWF, RSPB, the Angling Trust and the Association of Rivers Trusts and seeks to highlight the issues facing the rivers of England and Wales. To find out more about their campaign click here.

We discussed a range of local and national issues facing the rivers of England and more specifically North East Hertfordshire’s own chalk rivers, and I was very happy to learn that the WWF are to issue a special report highlighting the problems specific to the rivers Mimram and Beane. Having the WWF on board is fantastic news for the chalk rivers of Hertfordshire!

Me with Rose Timlett and Eva Groeneveld of the WWF

The dedication of the refurbished Ashwell URC Church Hall was a really enjoyable event on Sunday. The moderator for North Thames Area Revd Andrew Prasad preached a thoughtful sermon before we moved across to see the modernised hall. I was pleased to have helped in a small way with the Church’s efforts to raise funds for the project. North Herts District Council and WREN made substantial grants and church members held a number of fund-raising events. The Church Elder who had managed the project, Mrs Jackie Embury, was presented with a bouquet in appreciation of 3 years’ hard work. The Hall is well-used by villagers, who find it more central than the Village Hall. Also present were County Councillor Tony Hunter and District Councillor Dave Levett. 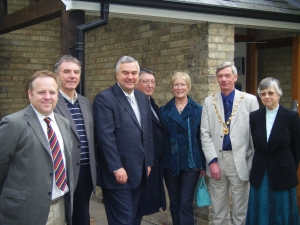 David Cameron’s speech at this year’s Conservative Party Conference was a thoughtful, sincere and personal message to the country. He began by reminding us that although for the Conservatives this year has been our final chance to say why we should lead the country before the next general election, for David, and his wife Samantha, this year will only ever mean the tragic loss of his oldest child Ivan. I don’t think anyone could be reminded of his loss and not be moved, nor wonder at the courage this man must have had to have carried on leading a national Party throughout his grief.

David’s speech explained that  the austerity measures announced in George Osborne’s speech earlier in the week were for a good and necessary purpose – a better Britain. He promised  “a steep climb, but the view from the summit will be worth it.”

He said, “I can look you in the eye and tell you that in a Conservative Britain: If you put in the effort to bring in a wage, you will be better off. If you save money your whole life, you’ll be rewarded. If you start your own business, we’ll be right behind you. If you want to raise a family, we’ll support you. If you’re frightened, we’ll protect you. If you risk your safety to stop a crime, we’ll stand by you. If you risk your life to fight for your country, we will honour you.”

I believe that David spoke for Britain when he said these things. He knows what he’s fighting for. Next year a better future for all – families, community and country. 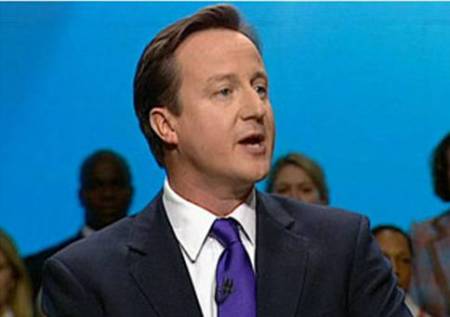 He said: “I am not a complicated person. I love this country and the things it stands for. That the state is your servant, never your master. Common sense and decency. The British sense of community. I have some simple beliefs. That there is such a thing as society, it’s just not the same thing as the state…This is my DNA: family, community, country.”

Labour has broken our economy, damaged our society and put our future at risk, but we are not doomed. With hard work and some sacrifice for all, we can put Britain back on track and, when we do, the “view from the summit will be worth it”…

Visit to the Royston Farmers’ Market

I always like to go to Royston Farmers’ Market when I can and last Sunday I was able to catch up with old friends. Peter Gear and his wife, Yvonne, from Highbury Farm in Wood End were selling their prize-winning lamb, which I had later for lunch. Also there was Vaughan West who I know from Royston church and the train to London. Vaughan is a long-standing member of Royston Labour party and it was good to see that the Farmers’ Market is supported across the political divide!

The Gears, Vaughan West and me at the monthly Farmers’ Market in Royston

George Osborne made his keynote speech on the Economy yesterday and it seems to be going down quite well with the media. His speech was frank and candid in its tone; for those who missed George’s “astonishingly forthright speech” (to quote the Daily Mail), it started to spell out what measures a Conservative Government would take to get a grip on the national finances. Not everyone will be happy with the commitments (today the unions have come out against the promised pay freeze for public sector workers) but I believe that most of my constituents appreciate that when faced with a national deficit of almost £200 billion, we are all going to have to tighten our belts*.

I was especially pleased by his renewed commitment to re-link the state pension to earnings growth in the next Parliament in order to ensure a decent standard of living for all in retirement, halt the spread of means-testing and restore incentives to save.

George also announced an updated review of the state pension age, as recommended by Adair Turner’s Pension Commission. Given the state of the public finances and rapidly changing demographic projections, the review would consider whether the increase in the pension age from 65 to 66 should be brought forward from 2026, starting no earlier than 2016 for men and 2020 for women.

*Although Osborne did promise to protect the wages of those earning £18,000 or less. For those who did miss his speech you can read a transcript here

Earlier this year the Save Our Bees Campaign sent me a packet of wildflower seeds.  The idea was for people to sow the seeds in their gardens to encourage the growth of the bee population.  I have previously blogged about the success of my researcher, Martin’s, efforts to grow his seeds on the windowsill of his London flat. I have also been pleased to see the seeds thrive in my Royston garden, although they have been late to open. But I now have a flower and would be grateful if anyone can identify it for me! 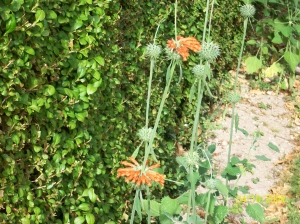