Taking the campaign to Buntingford, Barkway, Barley and Reed

Yesterday we were meeting voters in Buntingford, Barkway, Barley and Reed and the main subject raised was immigration and the need for a more efficient and effective system. Our Conservative policy of having a limit each year for non-EU immigration and a Border Police Force to enforce the rules is popular.

In Reed, a voter’s dog so liked us that he jumped in our campaign vehicle and refused to leave. Here is a photo: 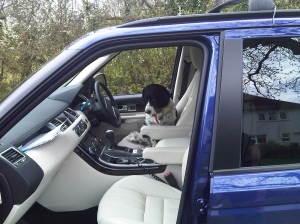 A dog gets on board with the Conservatives in Reed!

Speaking to local residents of North East Herts, many (including members of minority communities) have raised concerns at the weakness and inefficiency of Britain’s immigration system and I have explained the more straightforward Conservative policy.

Knowing how inefficient this Government is, I had assumed that their failure on immigration was due to the same old incompetence that runs through their overbureaucratic, spin-driven way of going on, which has led so many of the public to despair of anything they do working properly. This is the view of the public on most doorsteps – the Government could not run anything properly and you’ve got to get rid of him (the Prime Minister), “get him out”. The rise in immigration has led UK population since 1997 to go up by about 3 million. It never occurred to me that this was what they intended.

Yet, new evidence in the form of a secret policy paper clarifies that Labour’s past policy was to open the doors to immigration and was …. deliberate …. in an ill-considered attempt to boost economic growth and to meet “social objectives”. The paper has only seen the light of day following a Freedom of Information request.

Conservatives have demanded an independent inquiry into Labour secretly overseeing a deliberate open-door ­policy on immigration to boost multi-culturalism. Migrants have been thought more likely to vote Labour. Perhaps that was a motive too.

This disclosure puts Gordon Brown’s recent “British jobs for British workers” into context as a rather desperate late u-turn as the recession led to rising unemployment.

Damian Green, shadow immigration minister, has rightly attacked this secret policy. “This shows that Labour’s open-door immigration policy was deliberate, and ministers should apologise,” he said. “This makes it all the more important that there is a proper independent inquiry in the origins of this policy and whether ministers have been deceiving people.”

It is certainly true that we need the solid dependability of an immigration system that works.